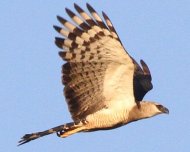 Amazingly during our second Amazonian Brazil tour in less than a month Andrew Whittaker (see his bio in leaders) again managed amazing views of the rarely seen Crested Eagle (Morphnus guianensis)! The first time the group saw a massive female of this magnificent eagle perched with the prey in its talons, a Silky Anteater taking it to her nestling. The second time was ten days after and a male flew in after tape-playback, allowing Andrew to take this flight photograph of this impressive raptor. Andrew had registered Crested Eagle in the Anavilhanas archipelago only once before 20 years ago and nest sites of this species are very rare. For every ten Harpy Eagle (Harpia harpyja) sightings it's possible to see one of these mighty Eagles so they are by far one of the hardest Neotropical raptors to list! See the larger image in our Facebook page Birding Brazil Tours - Crested Eagle in flight and Crested Eagle with Silky Anteater.