First photographic record of the Chestnut-crested Antbird for Brazil 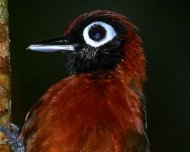 This is the first documented photograph of the obligate ant-follower Chestnut-crested Antbird (Rhegmatorhina cristata) for Brazil, made by Andrew Whittaker. Picture made during a private tour of Birding Brazil Tours in June 2011 to São Gabriel da Cachoeira, Brazilian Amazon but just published in August 2012 and still was the first record! Click here to see the record.