First Birding Rally Challenge of the world in Peru 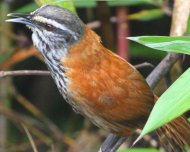 Peru was the base of the world's first birding contest with six days of non-stop birding in both the Amazon Rainforest and Andean Cloud Forest in late November, 2012. Six teams including several of the top birders represented Brazil, United Kingdom, USA (Cornell & LSU), Spain and South Africa; including our leaders Andrew Whittaker, Bruno Rennó and Eduardo Patrial were competing to record as many species as possible. Right until the end Andy's and LSU teams were neck to neck and the last won closely for only three birds difference being 493 species total! Andy together with his team were hypnotized in the last hour of the competition with the sight of an adult Spectacled Bear (Tremarctos ornatus) and her cubs (see photo here) which may have interfered in their great performance; but the team guarantee the unique bear observation was really worth it! However Andy's team did record the highest number of birds in a day with an amazing 240 species (from 5 am to 6 pm). Bruno and Eduardo team besides never having been to Peru managed fourth place.