The first hybrid species from the Amazon is a manakin! 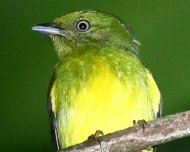 Exceeding rare hybrid bird species the stunning Golden-crowned Manakin (Lepidothrix vilasboasi) confirmed from the Amazon rainforest of Brazil! First discovered from Pará, Brazil in 1957 and described in 1959 by the late Helmut Sick (the grandfather of Brazilian ornithology) however was only recently rediscovered in 2002.

An international team researched together with Museu Paraense Emílio Goeldi to confirm that the Golden-crowned Manakin amazingly is a hybrid species formed when two parental species mate to produce a hybrid population, which then stops being able to freely interbreed with the parental species. In this case its parental pair were Snow-capped Manakin (Lepidothrix nattereri) and Opal-crowned Manakin (Lepidothrix iris).

Interestingly both species have very similar loud songs at their leks. Furthermore genetic sequencing combined with coalescent modelling has resulted in timing of this rare event at around 180,000 years ago when the two parental species originally mated. Comparing this time scale event with most Amazon bird species (which diverged from their most recent relative around 1.5 to 4 million years ago), means the Golden-crowned is a very young and recent species! One of very few photographs ever in the wild of this species is this lovely male taken in Pará in 2009 by Andrew Whittaker.